The theme of the doors is the Hymn ‘Immortal, Invisible, God only Wise’, a particular favourite of Her Majesty The Queen. The design is undoubtedly modern, with unframed glass, but pays reference to the window above, and other decorative elements such as the woodcarving of the pew ends. It has been designed to be a bold new addition, yet harmonising with the architectural whole. The bronze door handles and hinges also make reference to original features of the existing doorway. The design consists of passages of script from the hymn, and architectural forms inspired by the window above, which are subtly sandblasted into the surface of the glass. A secondary layer of low- relief appliqué sections involving floral designs adopted from woodcarving of the pew ends, leaves, and the royal cyphers, adds depth and texture. Designed to allow more light into the western part of the building, whilst revealing the attractive exterior vista from inside the building, its intention also was to present an attractive transparent screen when viewed from a distance, which invites closer inspection. The three dimensional passages give strength and interest when closely viewed. The doors are a highly attractive and functional addition to the chapel, which is held dear by the royal family, yet respecting its inherent modesty.

The doors were made by HWG artists Sarah Knighton and Gemma Curtis, who worked the sandblasted calligraphy. The team worked closely with art historian and specialist in 19th and 20th century stained glass and applied arts, Peter Cormack MBE, FSA, Hon. FMGP, and in close discussion with the Canon Chaplain Martin Poll, and architect to the chapel, Martin Ashley. The project was managed by HWG Director Jack Clare. The bronze furniture was made by local Wells company Elphis Engineering. The lime wood patterns for the door handles were carved by Will Barsley, and the framework for the doors was made in English oak by Treske Ltd. An unusual and fruitful collaboration. 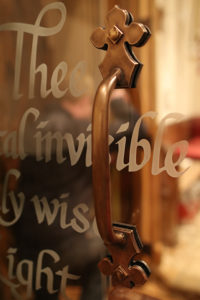 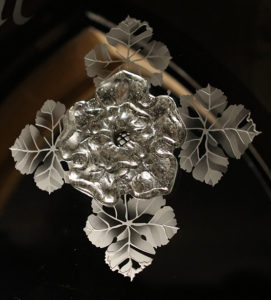 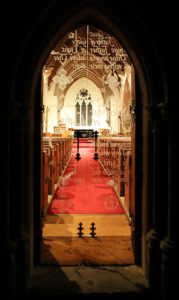