It is with great pride that in the year of her sapphire jubilee, we can report a private commission at Windsor by Holy Well Glass for Her Majesty The Queen.
The central theme of the doors is the words of Her Majesty’s favourite hymn. The calligraphy is sandblasted, there are also applied cast glass floral motifs. At the base of the doors are the royal cyphers of The Queen and His Royal Highness Prince Philip, set on native leaf forms, symbolic of his role as ranger of Windsor Great Park.
The doors were designed and made by Sarah Knighton, with applied decoration worked by Gemma Curtis. Jack Clare project managed the commission. We are indebted to Peter Cormack FSA, who advised on calligraphy and design. A custom made suite of bronze door furniture was made by local wells company, Elphis Engineering. The lime wood patterns for the door handles, were carved by Will Barsley. The splendid framework for the doors was made in English oak by Treske Ltd.
This highly successful collaboration has resulted in a beautiful modern work, which nevertheless harmonises with the original architecture. It has been described as one of the most significant works in the applied arts in glass.

At a delightful dedication service and ceremony, the choir gave a beautiful rendition of a choral piece by Sean Bui, en plein air outside the newly installed doors. Her Majesty The Queen graced the occasion with her presence, escorted by the Duke of York, and was kind enough to spend a few moments speaking with the artists and craftsmen involved. 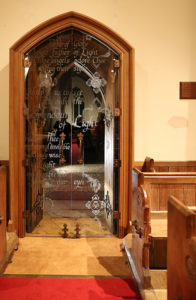 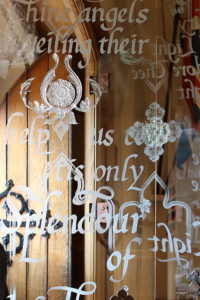 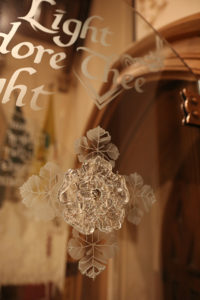