Conservation/restoration of glazed panels from the grotto lantern, to the roof of the main chamber.

Ascot Place is an 18th-century mansion, a private residence set in 400 acres of parkland in the county of Berkshire. It has various structures and statues in its gardens. Among them is this fantastic Grade I Listed grotto. Built in c1750 it is made of stone, with exotic mineral embellishments on the inside. Constructed in the era of the Picturesque designed landscape, it appears at first glance to be a mound of randomly disposed large boulders and blocks of stone, among grass, moss, and shrubs. Steps lead down to its cavernous entrance, which faces the east end of the lake.  Inside it is larger than expected; there is one main chamber and a number of smaller chambers to be discovered.  The central chamber lantern is glazed with 8 leaded lights with unusual cast lead glazing bars.  The walls are covered with small white glittering quartz crystals, and artificial stalactites hang from the roof.  The grotto had not been used or maintained for many years, and consequently had fallen into disrepair. The glazing in the lantern had also suffered. There was evidence of rainwater penetration, and the glass surface was dirty with cobwebs and lichen. There were some breaks to the glass, and one entire light had been previously replaced by a plain sheet of glass.

Working in collaboration with Cliveden Conservation, HWG carried out remedial in-situ repairs to the glass sections, including a general clean and maintenance, and lost putty replacement. Additionally one more severely damaged panel was removed to the workshop for repairs, and a newly manufactured panel cast in lead from a mould taken from the original was made to replace the previously inserted plain sheet glass section. 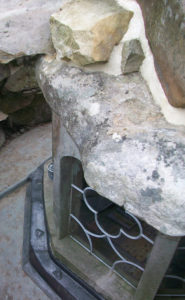 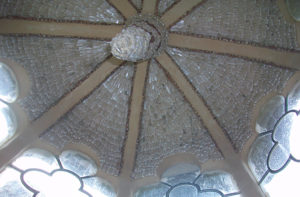 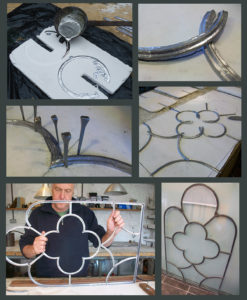