Conservation of vandalized stained glass panels. Works carried out to the stained glass and ferramenta in the roof lantern, Aviary lancet head panels, and Shell House panels, and the existing protective glazing system was refined.

This grotto was built in 1828, in the grounds of Jordan’s, the family home of John Hanning Speke, the Victorian explorer who discovered the source of the river Nile in Africa. It is a single storey stone built summerhouse in the picturesque “cottage ornee” style, with a thatched roof, Gothic style stained glass, and shell lined interior[1]. This was the time of the Grand Tour, when wealthy landowners were heavily influenced by classical architecture, and often created picturesque landscapes on their own estates, including grottos and follies as part of this trend.

Within the stained glass panels in the grotto there are many beautifully painted details and techniques, including butterflies and other animals, figures, flowers, heraldic devices, and architectural details, using a mix of red and yellow stain, and enamel colour. There are clear acid wash patterns and graffiti engravings, and original Georgian strips of coloured glass, set unusually, side by side with no lead in-between.

Unfortunately, the Aviary and Shell House panels had suffered substantial vandal damage and loss to both glass and lead. The less accessible lantern panels were more intact, although one had previously been blown out of the lantern entirely, due to storm damage. It was retrieved directly after, along with other important fragments, and placed in safe storage. It was necessary to draw up new layout diagrams for the leading process, for the more badly damaged aviary and shell house panels. All the glass including repaired and salvaged elements were reincorporated back into the panels, and some new pieces painted to fill lost areas; the paint detail based on evidence within the existing panels.

This conventional restrained restoration was based on repair and re-leading, and the re-fit used a method sympathetic to the surrounding fabric. Close collaboration with buildings conservators Humphries and Jones, in relation to the complex shell decoration and lantern structure, was important to achieve the best outcome. 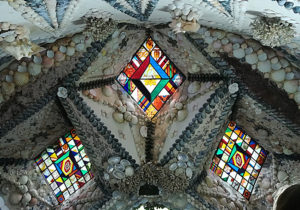 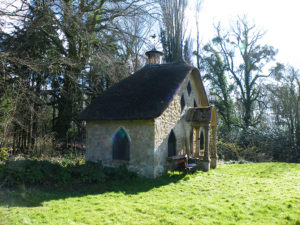 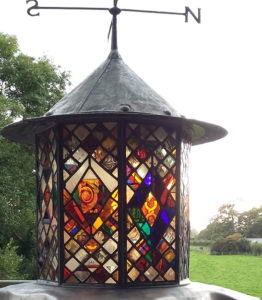 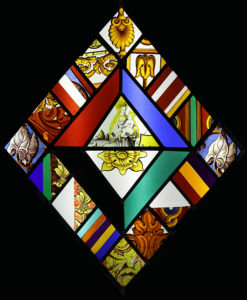