Workshop conservation of all panels, including lead replacement to vulnerable sections, glass cleaning and edge-bonding. Some remedial stone repairs were also carried out to the window mullions by HWG’s in-house mason.

The west window is a three-light window high in the western gable. The main lights, dated 1842, were made by the 19th century pioneering stained glass artist and heraldry expert Thomas Willement (1786-1871). They have standing figures of saints under niches and base panels with signs of the Trinity. There is ancient glass in the heads of all three lights. They contain groupings of European glass, almost certainly from the same collection grouped in the east chancel window, as well as 15th century English glass, probably from the original glazing scheme of the church. Early glass in the traceries is composed of medieval quarries; they contain stylized flowers, very typical of Somerset glazing and detailed in Woodforde’s ‘Stained Glass in Somerset 1250 – 1830’.

Before conservation, internally the glass had a high level of surface dirt and microbial growth, particularly the tracery glass. The 19th century glass was in good condition, whilst the 15th century glass was severely pitted with corrosion deposits on both faces. Several eyelets in the tracery were unusually fitted with paint facing externally, resulting in a corroded and matt surface quality. All early glass paint detail was fragile and undermined by corrosion. Paint on the 19th century main lights was under-fired and delicate, with some paint loss, much of the leadwork was very weak, with considerable ease of movement and flex when touched. Rare C18th milled lead was found in the heads of the main lights, and retained. 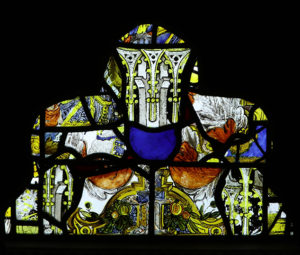 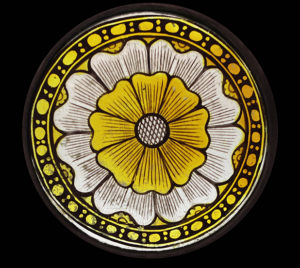 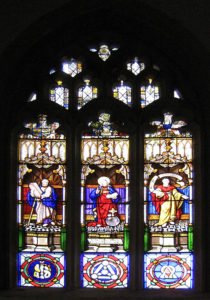