The conservation of the Nash picture gallery roof, and roof lantern, above the stairwell.

Picture Gallery Roof
The glazing of this enormous roof light was carried out in 1806-7 by John Betton of Shrewsbury (1765 – 1849), prior to the formation of Betton & Evans in 1815.  It has proved to be a problematic construction ever since it was first made.  The original construction for the roof lantern was designed with decorative glass panes dry mounted into curved timber frames.  These very large frames were supported with gilded iron hinges at the top, and secured by sliding catches at the base. Unfortunately the timber sashes flexed as soon as they were first opened for maintenance, and refused to close sufficiently for the restraining catches to slide into their pockets. Damage to the frame can be seen where attempts were made to lever the sashes and hammer the sliding catches into position. Many of the glass panes have been forced out of their rebates by the resulting pressure.

Today the structure is protected from the elements by an exciting new extendable roof above.  The thin crown glass panes of the original glazing approximately 1.5mm thick, have a simple repeated decorative device which was hand painted, but laboratory analysis confirmed that it was not kiln fired. Documentation showed that Betton offered his client two prices, and obviously the cheaper unfired option was chosen. The paint is applied in two distinct layers; a dark brown under layer, and a red top layer.  There are approximately 600 panes of glass in the roof lantern.  From accounts at the time there seemed to be a great deal of frustration, probably on the part of the glazier and the client alike, in attaining the correct aesthetic and consistency in appearance. A number of panes were fitted, only to be removed and re-ground and painted.

In-situ repairs were carried out, including edge-bonding broken glass sections, and after carefully monitored trials, cleaning was carried out on the exterior face of the glazing with de ionised water on swabs.  Any unsightly putty marks from previous work were also removed.  Modern cold colour repairs were not cleaned, as they were too delicate.  HWG applied cold paint on the inside face, to replicate any original paint that has been lost.

Some new sections were made to replace badly damaged areas, replicating the original ground glass process and painted decoration, and clearly date marked in glass paint.

Staircase Roof Lantern.
This nicely proportioned roof lantern above the stairwell is part of the John Nash period of improvements at Attingham Park c. 1797 – 1808, associated with the innovative picture gallery.

There are two layers in the construction of the lantern; an outer frame with heavy iron hoops at the base and apex supporting  20 ribs which form the glazing bars, and secondly the inner frame of softwood timber. The 20 leaded panels, which are highly decorative, but not Nash’s original glazing are set into the timber frame from the outside and dry mounted.  The glass design has a white ground with a geometric design in ruby glass. They are made with double rolled cathedral glass; a manufacturing technique introduced in the late 19th century, and the design style would suggest a date between the wars circa 1920 – 1935.  It is rather at odds with the muted original glazing in the Picture Gallery, which is of course more typically Regency in taste.

The structure of the lantern was in poor condition; the iron outer frame heavily rusted, the roof sunken, cracks evident in the external glazing, as well as friable glazing putty, and the inner timber structure required specialist conservation works. The leaded lights were very dirty, but otherwise in good condition.  Repairs to the glass were carried out on-site by HWG.  The stained glass panels were lifted from their rebates and a work area was set up on-site to carry out cleaning and any minor necessary repairs.

In conserving both sections of the gallery HWG have taken a cautious approach, carrying out as much work as necessary to secure and stabilise the existing glass, using reversible methods. And at the same time replicating original materials and techniques to consolidate and unify the original design intention. 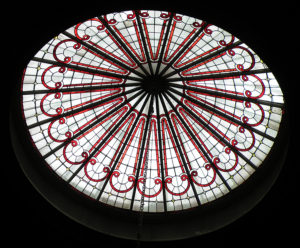 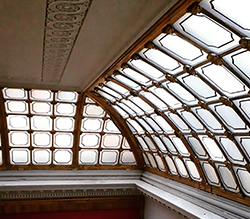