The restoration of the large glazing screen, replicating the original 1783 scheme.

Formerly the Middlesex Assizes/ Sessions House, it was built in 1779 – 82 to replace Hick’s Hall in St. John Street, where county sessions had been held since 1613.  The new site at Clerkenwell Green, in Islington was brand new, bigger, and more aptly situated for purpose.  Holy Well Glass involvement was connected to the restoration of the 18th century glazing screen, originally installed during improvements to the building in 1783.  It is the largest surviving example of original Georgian glass of its kind in the country.  Its original introduction addressed problems with acoustics in the courtroom, separating it from the public hallway that led up to it from the floor below via a sweeping double flight of stairs.  Designed by the architect of the building, Thomas Rogers the county surveyor, the cast iron, lead and  and glass screen became a permanent and transparent barrier between the hall and the court. The screen reached the full height of the wall in the hallway, whilst the lower glazing level did not extend to the floor, but began at a level roughly equivalent to the existing dado moulding of the hallway.

After 1923 the building was no longer needed for its original purpose, and was sold by London County Council as part of cost cutting measures.  There have been several owners since, including the Freemasons. Today it is being sensitively restored by brothers Ted and Oliver Grebelius, key features of the building, including the glazed screen being restored, making it a modern functioning space, in part of the Clerkenwell Green Conservation Area.

The intention of the project was to carry out conservation of the surviving upper areas of the screen, applying a strict policy of minimum intervention, with original fabric conserved and repaired in-situ. At some point in its history the extant glazing bars and glass had been over-painted with linseed oil based paint, on the stair side elevation, so that the screen became completely opaque and unrecognisable as a glass screen.  Therefore a large part of the project was to reveal the original aesthetic of the screen and take it back to its original function. Missing glass sections known to have had enamel decoration were faithfully reproduced.

A second major part of the project was to re-introduce the missing lower sections of the screen. Due to modern building regulations and for additional strength, a metal support structure was put in place, into which the entire screen was placed. Visually it was important for the new lead profile to look the same as the original, and casts were taken, from which lead sections were extruded. New replacement cylinder glass of precisely the same tint and thickness as the original was sourced for the glazing.

This enormously successful project was one of the largest of its kind, and structurally challenging. It now showcases one of the finest examples of the Georgian architectural tradition. 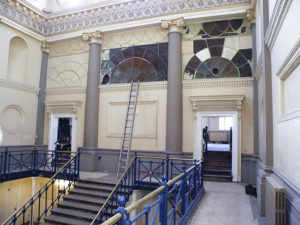 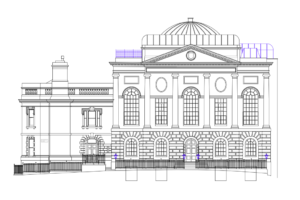