Conservation of the remains of late 14th century and early 15th century stained glass. A bespoke internally ventilated protective glazing system (EPG) was designed, manufactured, and fitted to protect all the medieval glass, and repairs were carried out to the surrounding stonework by HWG masons.

The medieval glass at Birtsmorton Church is of national significance, superb in both quality and execution. It is contained in a two-light window sII, on the south side of the chancel, seven tracery panels from Windows sV-sVII, nIII, nV-nVII, and one head panel from Window WI. Much of it today appears fragmentary, especially Window sII, which was removed from the church in 1877 and replaced in 1940. The central sections are a collage of fragments from the original glazing of the church circa 1390, whilst the heads and base sections date from the 1940’s restoration.  There is unusual iconography, including a 15th century depiction of the Christ Child baptizing St. Christopher. Surviving donor figures wear contemporary continental European state-of-the-art protective armour. This includes the only known examples of the “klappvisier” helmet visors in English art, which open and close on a single hinge located centrally above the brow. The tracery lights contain arms of the local Ruyhall family, linked to the initial ‘R’ found in the border design in WI and sII, testifying to the patronage of an eminent local family with unusually well documented links to Great Malvern Priory. Lawyer Richard Ruyhall served Thomas Beauchamp, Earl of Warwick, and held the Manor of Birtsmorton until his death in 1408.

Conservation repair work included cleaning to remove algae and lichen growth on the glass surface, and edge-bonding broken glass sections. Partial removal of leads was only necessary either where panels were weak or to enable access for glass repairs. As much lead as structurally possible has been kept, including extant medieval leads. 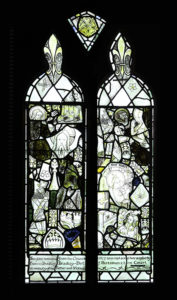 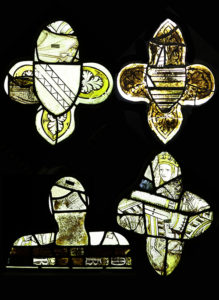