The high level presbytery stained glass at Winchester Cathedral is nationally important and includes glass of the highest quality; it houses works of 15th century art to the north and south elevations, from the circle of arguably the greatest medieval glazier, Thomas glazier of Oxford.  The main lights depict figures of standing saints and prophets within architectural niches on a tiled pavement, whilst the tracery lights have feathered angels and seraphim standing on wheels.  This scheme was sponsored by William of Wykeham, who was Bishop of Winchester, Lord Chancellor of England, and the founder of New College and Winchester College, Oxford. The east window is the work of Flemish glaziers associated with major commissions, including royal commissions in the early 16th century, and commissioned by Bishop Fox.   The influence of the distinguished patrons of the building and its glazing, and the architectural progression of the cathedral sponsored by them is significant.  The glass was in very poor condition structurally, and in need of urgent attention. Holy Well Glass adopted a phased programme of repair, based on the international conservation principles of minimum necessary intervention.  Distinct approaches were used for the 15th and 16th century glass.  For the east window stained glass, which was generally in good condition, in-situ cleaning was carried out. For the stained glass in the north and south elevations, the panels were removed to the workshop, where removal of the lead was only considered where the lead was in a structurally poor condition. During these repairs it was also possible in selected areas to remove obtrusive leads that had disfigured main details, for example hands and faces, and a number of previously broken pieces were edge-bonded together.  A system of internally ventilated environmental protective glazing was installed to the north and south elevations to arrest any further damage to the glass. 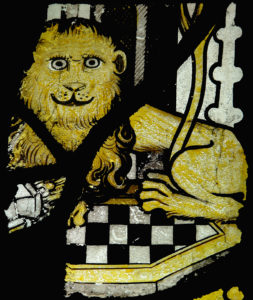 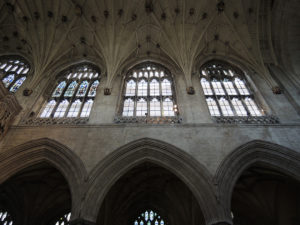