A mix of partial and/or full conservation of seven windows from the north transept and north presbytery aisle; numbers nVIII-nXIV, including the design, manufacture, and installation of a bespoke ventilated environmental glazing system for the protection of all the medieval and late medieval stained glass.

The north presbytery aisle and north transept stained glass at Winchester is nationally important; it houses significant remains of early 16th century art commissioned by Richard Fox (Bishop of Winchester 1502-28); the work of Flemish glaziers associated with major commissions, including royal commissions. The influence of a distinguished patron of the building and its glazing, and the architectural progression of the cathedral demonstrated in this area of the cathedral is highly significant. The traceries in Windows nVIII, nIX, and nX are probably in their original position. There is additionally Carolean glass in the traceries of window nXI with Putti, Sun Rays and blue enamelled decoration. Window nXI also has an early 20th Century assemblage of ancient fragments, the collage effect of which is reminiscent of the Great West Window, fragments of the window also relate stylistically to the west window. Window nXII is a fine example of the work of Christopher Whall, the leading Arts & Crafts period stained glass artist and is therefore of national significance. Medieval glazed panels remain in the four side tracery elements of Windows nXII and nXIII; the latter consists of rare and beautifully striated red mouth-blown glass, presumed to be 14th century work. The plain quarry glazing, of several periods, contributes significantly to the texture and beauty of the building.

The entire conservation process at the cathedral, carried out over two phases, has taken an holistic approach, engendered by the architect and the conservation management team at Winchester. Prior to conservation of the glass it was acknowledged that the windows were in poor condition and in need of urgent attention. A detailed method statement was formulated; an integral part of the wider process and prepared based on a detailed assessment and discussion to ensure a balanced and appropriate approach to the work. Holy Well Glass carried out a phased programme of repair, based on the international conservation principles of minimum necessary intervention.

The primary charters that underpin the concept of minimum intervention, and which were adhered to in this programme of conservation works are the CVMA Guidelines for Conservation, the Burra Charter, and the SPAB Manifesto. Within this general principle, the Christian context of the window was of primary importance in the conservation philosophy. Prior to works carried out, as well as a detailed examination of the window by Holy Well Glass, there was collaborative investigative works carried out by a team of specialists, including the architect, art historians, the cathedral archaeologist, and specialists in environmental monitoring, as well as consultations with the FAC (Fabric Advisory Committee) and the CFCE (Churches Fabric Commission for England), all of which combined to inform the conservation approach.

This work provided the opportunity to examine the lead net, assess the alien insertions and understand more about the radical restoration and rearrangements of all the surviving medieval glass in the cathedral that took place during the early twentieth century. Above all, this work has significantly enhanced the legibility of this exceptionally rare and outstandingly beautiful glass. 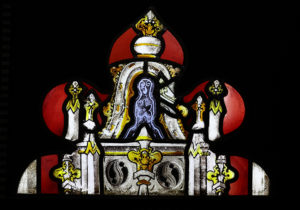 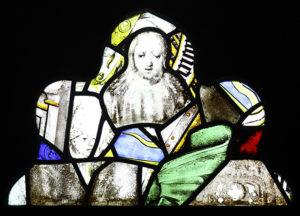 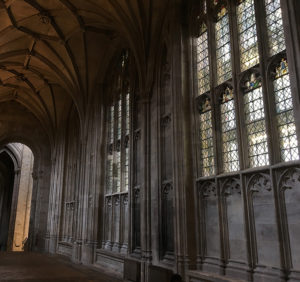 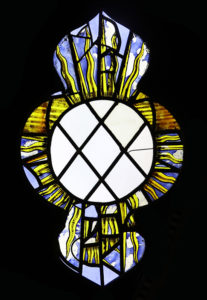