The repair of a vandal damaged window in the Saloon Dome.

The building of the Pavilion began in 1787 and was intended as a seaside retreat for George, Prince of Wales, who became Prince Regent in 1811.  It was further extended to give the building we know today, complete with domes and minarets, under the directorship of architect John Nash (1752 – 1835).  The Saloon was the last of the three great state rooms to be restored since it came into public ownership, and is one of the finest interiors in the country. A recent restoration project refurbished the Saloon Dome . As part of this HWG removed and conserved all of the extraordinary curved double-ogee windows, conserving original material where possible, and specially commissioning slightly tinted glass for replacements.  Unfortunately some time after completion one of the windows suffered serious vandal damage and required immediate attention.  Surrounded by a wrought iron outside frame and sub frame, it is typical of early 19th century construction, with small cast lead glazing bars with complex mouldings attached.  The window was extensively damaged, and all the glass was destroyed. The cast lead glazing bars were forced inwards and became mangled, and the central oval section had all its joints broken. The remains of the curved window were removed from the building and taken to the workshop.  Accurate templates from the existing windows were taken to determine the correct curvature for the conserved frame. HWG carried out conservation of the cast lead glazing bars, re-glazed in tinted hand blown glass to closely match the original crown glass, which had to be kiln formed to the correct curvature. The frame was re-decorated, before re-fixing.  The HWG approach to conservation of “As much as necessary; as little as possible”applies to this work, despite the level of destruction, much of the original material was rescued. 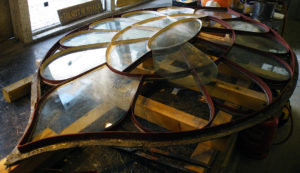 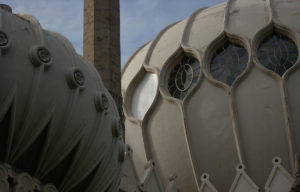 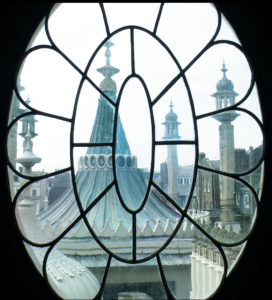