Job specification – conservation of an oval roof light, including its removal, workshop conservation, and refitting.

Sandycombe Lodge is a Grade II listed. It is on a  charmingly  domestic scale;  a picturesque cottage retreat for the great man. Designed and built by Turner in 1813, it is now owned by the Turner’s House Trust to be preserved as a monument to the artist. In poor condition, it was put on English Heritage’s Heritage ‘At Risk Register’ in 2013. More recently, however, HWG were been commissioned to repair the roof light as part of a major Heritage Lottery Funded restoration and redecoration programme, to return the house to its original appearance in Turner’s day.

The work involved the repair of an oval roof light set above a stair, approximately 920mm x 1600mm. It is formed in typically 18th/ early 19th century style of decorative cast lead mouldings with a tinned ferrous central web forming a glazing rebate for the painted crown glass. The borders have a fine foliate pattern picked out of transparent couverte enamel. The central areas are covered in transparent enamel except for the very centre which has a floral centre boss with silver stain. The effect is subtle and pleasing.  It is believed that his friend John Soane collaborated with Turner in the design of the house and this intimately scaled curved stairwell and roof light certainly accord with that view.  The decorative glass was dirty on both sides, and a number of later additions were identified, but the paint was stable and well fired. The decorative roof light was removed from site in its entirety and transported to the workshop for repair. All the glass was then removed from the frame by carefully paring away putties by scalpel. Once removed from the frame each piece of glass was cleaned using a mixture of acetone and de-ionised water on cotton wool swabs. Any cracked glass was repaired by edge bonding with epoxy resin, and further back-plated with 1.2mm protective float glass.  Where necessary small sections of new glass were cut into clear areas using matching glass. Paint and stain samples were produced to ensure the closest match, in terms of colour, density, and thickness of line.  The original cast lead mouldings were cleaned of paint and hard putty pared away through careful use of a scalpel followed by fine sandpaper, and paint was also removed from the wooden frame using sandpaper. This preparation allowed repairs to the frame to begin, where piecing in new cast lead sections was required.  The original lead frame was cast in to an intricate moulding.  At several points at the perimeter of the frame the lead casting had parted from the thin iron rear section and could be seen hanging loose.  These areas required new cast sections to be introduced, as well as other solder repairs to the frame. 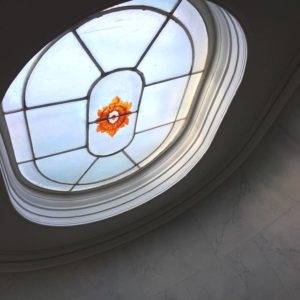 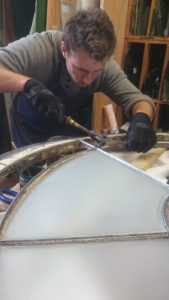 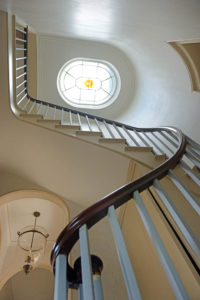